The rise of Clark 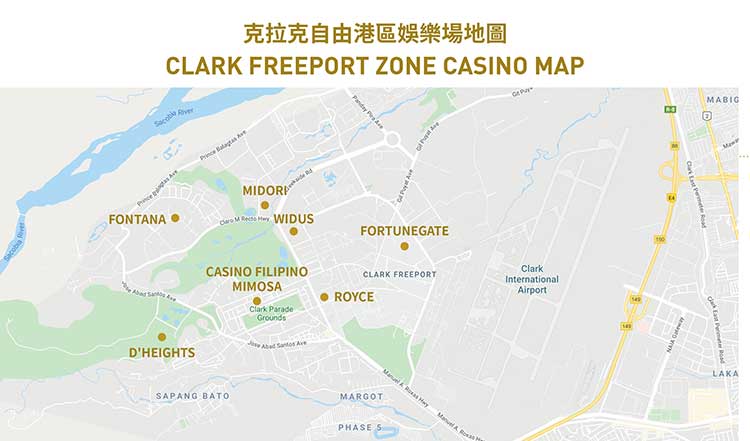 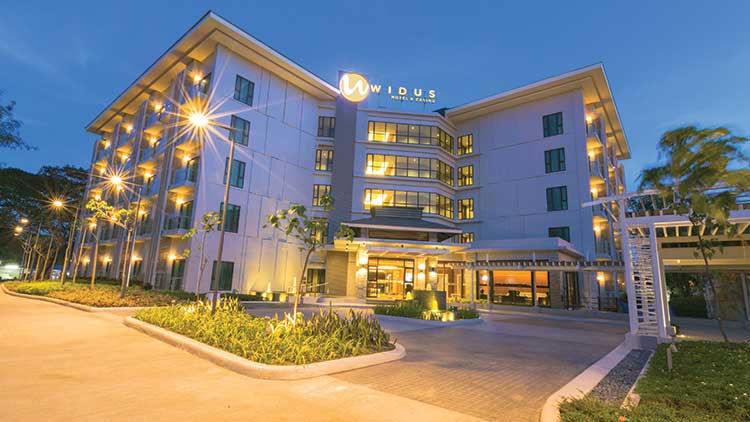 Singled out by the government as a vital new economic center for the Philippines, Clark is not only an emerging business and tourism destination but is rapidly positioning itself as Asia’s next major casino hub.

It’s 11am on a Monday morning and the roads outside Clark International Airport, located right in the heart of Clark Freeport Zone, Central Luzon, are flowing freely. Complemented by tree-lined streets and pockets of open space, it’s notable not so much for the lightness of traffic as the stark contrast to the Philippines’ more prominent economic hub of Manila, located two hours to the south by car.

But none of this is by accident.
“We have a very nice environment here – our water is still clean, our air is still fresh and we’d like to keep it that way,” explains Oliver Butalid, a consultant of Pampanga Province for Investments and Tourism and a key driver of the region’s “Megalopolis” master plan, released in February 2018.
“We want to avoid going in the same direction as Metro Manila.”

The Pampanga Megalopolis plan is a comprehensive strategic plan aimed at harnessing the rapid growth currently being enjoyed by the province while making sure to “spread the wealth”, ultimately avoiding a so-called “do-nothing scenario” of over-congestion in some of Pampanga’s 22 identified towns and under-development in others.

Under the slogan “Pampanga: Counter-Magnet of Metro Manila”, the plan’s implementation revolves around five key investment priorities – anchor tourism destinations, light industrial parks, high-value manufacturing, high-value agriculture and smart city technologies – with the location of each to be determined by the unique competitive advantages each town has to offer.

Central Luzon, the administrative region overseeing seven different provinces in the Philippines’ central plains, booked 9.5% GDP growth in 2018, well above the national average of 6.2%, although Butalid notes that some provinces performed better than others.

“Although we don’t have the aggregated data for that, we are sure Pampanga did the heavy lifting,” he adds.
Located along the north-western border of Pampanga and traversing into neighboring Tarlac is Clark, a Special Economic Zone highlighted by the Government of the Philippines as the nation’s next major economic center.

Spanning 32,000 hectares – about half the size of Singapore – Clark’s emergence as an economic powerhouse owes much to its history as a US Army base and, more specifically, Clark Air Base which was America’s largest overseas military installation for the best part of a century.

When the US withdrew in 1991 following the eruption of Mt Pinatubo, which destroyed many of the buildings at the air base, the Philippines designated the area as a Special Economic Zone. The Clark Main Zone, an area covering 4,400 hectares including the former Clark Air Base, was designated a Freeport Zone in 2007.

“Right now, Clark is about 50% tourism related industry and 50% investor manufacturing, but the way it is shaping up our focus is on Clark as an MCE (Meetings, Conferences, Exhibitions) destination,” explains Noel F. Manankil, President and CEO of Clark Development Corporation (CDC) – the government body tasked with overseeing Clark’s transformation from a military base to an economic center.

“We envision Clark eventually being entirely tourism, and manufacturing will be pushed back to New Clark City (a newly planned community covering 9,450-hectares located 30km to the north and set to be linked to Clark by highway).

“That’s how we see it and the main driver for this is the airport. It’s also why we see now such a rise in integrated resorts and expansion of the casinos here.”

The only Freeport in the Philippines to boast an international airport, Clark’s potential as a secondary economic hub was long ago identified by the national government, even if it has taken a while for surrounding infrastructure to catch up.

The region’s casino and tourism industry has also been developing for over a decade now – Fontana, Mimosa, Royce and Widus casinos all opened pre-2010 – lured by the lucrative tax incentives Clark’s classification as a Freeport Zone provides.

Qualified locators setting up inside the Freeport pay just 5% tax on gross income earned, less allowable deductions, in lieu of all national and local taxes, and are not required to pay property tax. They also face far less red tape than may be expected elsewhere due to the CDC holding absolute governance of the broader Clark area.

“One of the features that makes Clark very attractive to foreign investors is that they only talk to one face of government, so all construction permits, building permits, excavation permits, we issue all of that,” says Manankil. “It’s only the CDC that issues all of this. It’s less complicated and our governance in handling our locators is much preferred.”

Nevertheless, it is the promise of greatly improved access brought on by the Duterte government’s “Build, Build, Build” national infrastructure program that has spurred the sudden surge in development within Clark over the past three years.

In 2020, the first of four new passenger terminals planned for Clark International Airport will be complete, tripling the annual passenger capacity from its current level of 4.2 million to 12.2 million. By the time the fourth is open in 2025, annual capacity will be a massive 110 million people.
If recent trends are anything to go by, the bigger the better, with passenger arrivals rising by 73% to 2.61 million in 2018, up from 1.51 million 12 months earlier.
Complementing the air access is better road and rail infrastructure, most notable being the US$15 billion North-South Commuter Railway connecting Clark and Manila, including a link to Clark International Airport, opening in stages from 2021. A second line connecting Clark and Subic will commence construction next year.

The golf course at Sun Valley – one of 11 courses and 198 holes that Clark will offer once current developments are complete.It is with this in mind that Clark has seen its gaming and leisure industry launch explosive growth of its own. As 2019 draws to a close, Clark is home to six casinos, including Royce and Widus – both in the midst of major expansions – D’Heights which opened earlier this year, Fortunegate (formerly Casablanca) which re-opened after two years in June, plus Midori Clark Hotel and Casino and Casino Filipino Mimosa.

Another two properties, one by Filinvest Development Corp and another by PH Resorts Group, are already in the works while there is talk that Fontana – once Clark’s most prosperous casino until authorities shut it down in 2016 for the hiring of illegal Chinese workers – could also re-open under new ownership.
The revenue trajectory has been just as sharp. In 2018, Clark’s casino GGR grew 22.4% to Php8.62 billion and is on track to rise by another 37% to Php11.81 billion in 2019. The Innovation Group’s Michael Zhu says Clark casinos will rake in around Php13.07 billion in 2020 and Php14.64 billion in 2021 – representing a better than 100% increase in five short years.

And all thanks to Korea, with Clark’s number one source market providing around 20% of visitors to the area but 70% of its GGR, according to Royce Hotel and Casino’s General Manager – Casino, William L. Avendaño.

“When Fontana was still open they were able to produce an average of Php6 billion to Php9 billion from phone (proxy) betting every year,” Avendaño explains. “Since the closing of Fontana we don’t get the same phone betting numbers but we do produce the same gross gaming revenue in total now, and most of that comes from Koreans.”

Indeed, Clark’s casino operators recognize the vital role golf plays in luring Koreans to the area, with 11 world-class courses either already operational or in development. Those open for business include two 18-hole courses at Mimosa, two more at Sun Valley and an 18-hole course next to the shuttered casino at Fontana.

A recently announced development by Widus on 450 hectares in nearby New Clark City will include four more golf courses, while another three can be found 45 minutes away in Subic.

“The Korean story is all about the fact that it’s cheaper for them to take a plane to Clark, play daily golf and fly back than to stay in Korea and book a single round of golf,” offers Manankil. “It’s cheaper to come to the Philippines, and of course there is the added bonus of the casinos which they can’t access back home.”

It is with this in mind that Manankil has developed his vision of Clark as the MCE capital of the Philippines – a global tourist destination offering everything from world-class business and convention facilities to the very best in leisure and entertainment via luxury casinos, five star hotels, an abundance of golf courses and large-scale family theme parks.

Likewise, Clark’s casino operators aren’t scared to admit they have Manila’s Entertainment City in their sights.

Widus Tower and Casino is undergoing a second expansion that will lift its gaming offering to 200 tables and 1,000 slot machines.“You know what we have in Clark that they don’t have in Entertainment City?” asks Edwin D. Mendoza, a Director at D’Heights owner Donggwang Clark Corporation.

“Quick access. They have their own airport and we have our own airport, but for them to travel from the airport to the casinos takes 20 to 30 minutes while it takes us less than 10 minutes.

“Clark is just like Manila but without the traffic. All the facilities they have in Entertainment City we have here as well but what we don’t have is the congestion.

“You’ll also notice when you drive around Clark that there are a lot of development projects, road widening projects, taking place and you might ask yourself, ‘Why are they widening the road when there is no traffic?’
​
“It’s called future planning. Foresight. In Clark, before the problem arises, we already have the solution. That’s the difference.”
https://www.asgam.com/index.php/2019/11/26/the-rise-of-clark/