Revolution properties has designer homes, now precrafted for ease of access and at a fraction of the cost 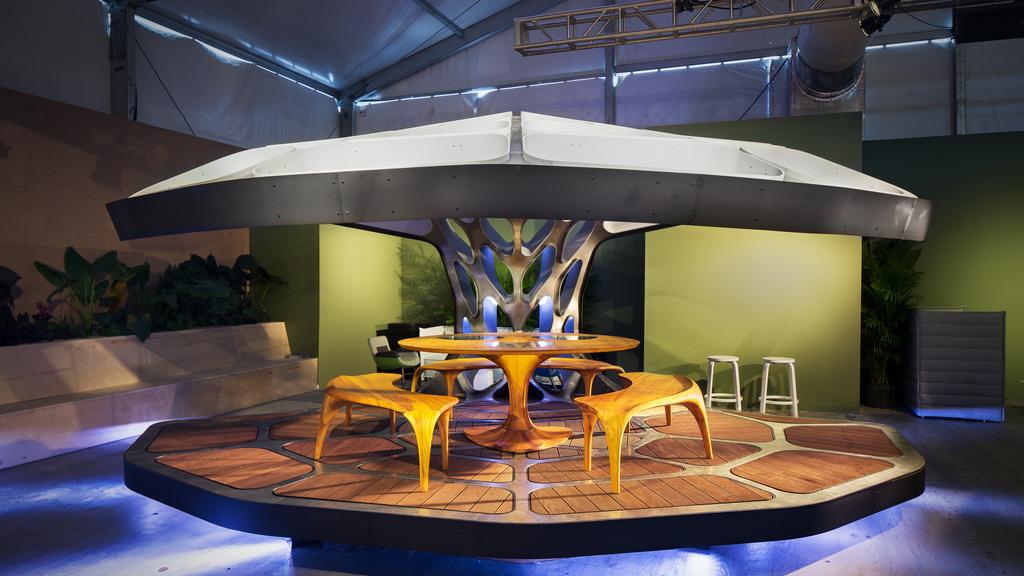 Volu Dining Pavilion by the late Zaha Hadid. Courtesy Revolution Precrafted Properties
We meet Robbie Antonio, the man behind a collection of limited-edition structures by some of the biggest names in design.

Robbie Antonio turns up to our meeting at the Armani Hotel ­Dubai with a friend in tow. That friend, as it happens, is ­the designer Marcel Wanders. We chat for while, before Wanders politely takes his leave. It's an unexpected interlude, although I probably shouldn't be surprised. Wanders is one of the many big-name designers that Antonio has teamed up with for his latest venture, Revolution Precrafted Properties.

Unveiled in December during DesignMiami, Revolution is a collection of limited-edition, prefabricated (although Antonio prefers the term "precrafted") structures, conceptualised by some of the biggest names in design. Although not all of the "properties" have been unveiled yet, ­Revolution has already enlisted the services of more than 30 creatives from the worlds of art and architecture, as well as fashion, product and interior design. We're talking the likes of Lenny Kravitz, Ron Arad, Tom Dixon, the Campana brothers, Zaha ­Hadid (who, sadly, died last week), and several other Pritzker-Prize-winning architects.
​
There are two types of structures: pavilions, which include such delights as Hadid's Volu Dining Pavilion, Sou ­Fujimoto's Infinity Ring Pavilion and ­Arad's ­Armadillo Tea Pavilion. You might expect to find these on the grounds of a trendy boutique hotel or in the gardens of a particularly expansive villa. "You can dine in a Zaha Hadid pavilion, meditate in Sou Fujimoto's ­Infinity Ring or relax in an outdoor library courtesy of Daniel Libeskind," Antonio says.
There are also the self-­contained homes, which include Wanders' Eden and the Billboard House by David Salle and AA Studio. These, too, will appeal to hotel owners seeking to offer a unique stay, or to homeowners looking to install a designer-branded extension, or invest in a holiday home that will double up as a talking point. Or they could just act as your actual home.

Hailing from the Philippines, Antonio, 39, has been dubbed Asia's youngest real-estate ­tycoon, and is the managing director of the family-founded, Philippines-based Century ­Properties Group, as well as the founder and chief executive of the New York-headquartered ­Antonio Development. Valued at US$2.1 billion (Dh7.21bn), Century is responsible for some of Asia's most groundbreaking buildings: including Trump Tower at ­Century City, which garnered the highest price-per-square-foot in Philippine history; Forbes ­Media Tower in Manila, the first Forbes-branded tower in the world; the first Versace-designed residences in Asia; and the first Missoni-designed residences in the world. Antonio is also an ardent art enthusiast, and owns one of the largest collections of international and contemporary art in Asia. "I am an avid enthusiast of art, architect, design and real estate," Antonio tells me. "I wanted to incorporate all my passions and create something that would inspire other people. Something that is transportable by nature, but also collectible.
"The value proposition [of the precrafted properties] is quite formidable," he continues.

The premise is this: let's say you wanted to get one of the aforementioned designers to create something for you. Assuming that you could get access to them, it would take a year, if not more, to put something together, and it would probably cost you a small fortune. With Revolution's precrafted proposition, you get your designer home delivered within three months, it'll take a matter of days to install, and it'll come at a fraction of the cost. That's not to say it's cheap, exactly - the homes cost from about $250,000, going up to $450,000 (up to Dh1.65 million), and this excludes shipping and installation (the structures can be shipped anywhere in the world - pricing will depend on the geographical location and specifics of your site). And you will need the land. But you will get a great big piece of design that will invariably be the envy of your neighbours.

Essentially, Antonio is trying to make the work of these starchitects more accessible to more people. There's also the promise of flexibility: the structures can be placed wherever you wish, and dismantled and moved at will.
It's a novel idea - but first one has to process the paradox that lies at the very heart of the concept. While prefabricated homes are traditionally associated with mass-produced social housing or temporary office structures, ­Antonio's creations fall at the opposing end of the spectrum. These are beautifully designed spaces by the best-known creatives in the world, made for people with the space, means and appetite for what is essentially collectible architecture - functional sculpture on a very grand scale.

"It's disruptive," Antonio concedes, with a smile. "We are combining technology, real estate, architecture and design. But really, who's done anything interesting in this arena since Jean Prouvé?" he says, referring to the work of the famous French architect and designer, who pioneered the idea of modular, affordable, prefabricated buildings in the 1940s, designing a series of ­Demountable Houses to answer the need for cheap, speedily constructed homes in the aftermath of the Second World War.

Antonio's proposition is obviously a little different. A total of 19 of the structures have already been unveiled, with "at least two dozen more on the way", and each is entirely unique. As Antonio points out, some of the structures are better suited to warmer climates, while others will blend more seamlessly in mountainous, desert or coastal ­environments.
Wanders' luxurious, glass-­encased Eden, for example, has a South East Asian feel, and ­features wood, stone, bamboo and aluminium elements. To further enhance that tropical vibe, you can include a lap pool, outdoor bath tub or pre-planted frangipani tree in the design.

Salle, meanwhile, who created the Billboard House in partnership with AA Studio, was inspired by the idea of creating a house and studio complex for himself and his family that could easily be installed on a site in the west ­Texas desert. Again, the generous use of glass is designed to break down barriers between the indoors and out, while the simple streamlined proportions of the space ensure that it sits comfortably in its stark environment.

Antonio claims to have challenged all of his designers to "do their best work", and one imagines that for many, this was an intriguing undertaking. There are plenty of constraints and parameters inherent in the proposition. For one, size - most of the structures measure between 50 and 250 square metres. To ensure that the properties are ­shippable, variables such as shape and weight need to be carefully considered, which in turn requires the careful selection of materials (Antonio admits to having had to value engineer many of the original designs - for example, a design featuring curved glass was, for obvious reasons, adapted. "It has to fit in a container; you lose the value proposition otherwise," Antonio reiterates.)

It's also very important that the mechanical, electrical and plumbing components are in adherence to international standards, to ensure that the structures will function wherever in the world they may end up.

Antonio says there has already been a "tremendous" amount of press attention and interest from developers and clients, although he refuses to reveal if there have been any orders yet, or where and when we might expect to see one of the structures in situ. We hope it's soon, because we're as intrigued as everyone else.
Selina Denman
​www.thenational.ae